The new service will provide free support and advice to entrepreneurs and small business owners.
Following a successful pilot in Newcastle, Leeds is the second city to open its Business and IP Centre.  There are plans to open similar services in Birmingham, Manchester, Liverpool and Sheffield over the next year.
Services on offer include access to resources and information on running a business, workshops and advice sessions.
More information:  The British Library 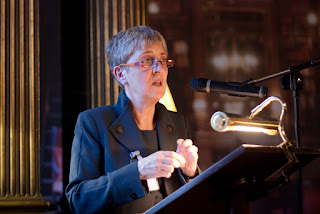 Lynne Brindley, the outgoing CEO of the British Library, addressed an audience of editors, authors and other interested parties at a SAGE reception held at the Reform Club on 26th April.  Her speech reflected on the changing roles of publishers and academic and research librarians – and the relationships between them.
A book or journal can now be created and accessed digitally and content is being liberated from physical space.  Meanwhile, as the debate surrounding access continues, intellectual property law has still to catch up.
Academic libraries also have to reassess and articulate their value to their customers and fight for research funding.  The debate around open access continues.  Data heavy research is not just the new normal in STM – other disciplines including the humanities are joining in too.  Lynne urged libraries “to articulate what role they might play in this field and publishers not to lock down possibilities for data and text mining in a too defensive a stance.”
The generation and dissemination of new knowledge is a critical activity and the different stakeholders must work together ensure success.  Despite dramatic changes in the wider information landscape, Lynne believes that shared values endure.  She called on all interested parties to focus on what they have in common and work together to reach creative solutions and design new business models.

BIR features the National Library of Scotland in its December 2010 issue. Maureen Ridley presents its SCOTBIS service and demonstrates tactics for reaching remote users. National libraries are showing the way too in how they partner with other organisations to support economic development.

The historian Lisa Jardine, in her most recent podcast in the Point of View series on Radio 4, considers the fate of public libraries in economically straightened times, particularly as ‘almost two thirds’ of the UK population went nowhere near a public library in the last twelve months.

She then goes on consider the pleasures of reading ‘real books’, and more importantly, keeping and displaying a hard copy book. The success of Oprah Winfrey’s book club in the US in bringing enormous numbers of people to contemporary fiction as well as to literary classics has certainly changed the fortune of many authors, influenced changes in publishing models and may well have created a whole cohort of self educated readers. Winfrey’s readers are quite clear in their demands. Their preferred format is an attractive, hardback book that they can keep and display.

This in itself does not mean that e-versions of books will not find their market too. Jardine is grateful to be reading Blair’s enormous tome electronically, even though it means she does not get to see the previously unpublished photographs of the Blair family to which hard copy readers are treated.